Zeeny and the Pola Cats 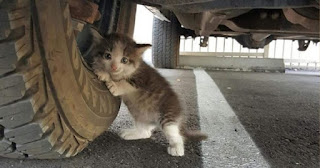 So my friend  Zeeny sterilizes stray cats. Regularly. Obsessively. And persistently. She is happy that I told her how to go get them operated. You just have to grab them, starve them a few hours before, and make an appointment with a vet and take them over and then look after them for a few days afterwards till they heal. And then no matter how much you grow to love them, you have to release them back to the pitiless street from where you got them because most people are not very willing to give street cats a home.

People criticize us religiously saying that we are interfering with Gods plan. Or that we are accumulating bad karma and we should be childless in the next birth. But she cares about the cats. People who don't know her scold her and judge her and tell her that she will be barren in her next life. If you never had access to birth control, and you continued helplessly to have child after child after child would you be so judgmental ? Have you looked at a stray cat that has had kittens every six months for a few years? Have you seen how tired and haggard it looks?  You do not see the struggle that it goes through, to get food, with people chasing pregnant cats away continuously; you have not seen how much it suffers trying to protect its young on the street. Some people think of cats in human terms, and say that we should not interfere with Gods arrangement. They forget that unlike humans, stray cats or dogs do not have employment, and that they have young every six months if they are not spayed. Female stray cats do not have the support of their husbands. They also mate freely with their own siblings and parents and offspring and that leads to deformities.  Street animals are often neglected and diseased, and many cause road accidents and die, or steal food out of desperation and then are attacked mercilessly by people and left to die in terrible pain. I have seen female dogs with broken legs screaming while being gang raped because they happen to be in heat. Male dogs (and also clearly male Gods) don't think about these things, though as women we do. Often people like to ignore all these facts as they tell us about God's plan, or karma. Often I feel they can afford to be sanctimonious because then they don't have to spend time or money on spaying operations, they can just shrug and leave it to God.

A one-woman mission against stray overpopulation in Wellampitiya

Some of them tell us that they find homes for their kittens/puppies among contacts. But the truth is that because those homes are taken up by the animals that are bred, then there are no homes for the street animals who will continue to be neglected and unloved. Then some people say that they are animals of the forest and should be able to find food from the jungle. This is not true either because cats and dogs are domesticated animals and often there is not enough food for them in the cities, leading cats in overpopulated areas to forage among other species such as rare birds and rodents, to feed themselves. This is bad for the environment in the long term.

For all these reasons Zeeny will continue to spay the stray animals she finds and I will continue to try to find funding for it. Possibly both of us will be barren in the afterlife, but until then we are happy when we go to the pola and see the young females we have spayed living a carefree life without being gang raped, getting continuously pregnant or being chased with brooms or boiling water.