Then One Shot throws Anarkali off his motorbike and she is never seen again... 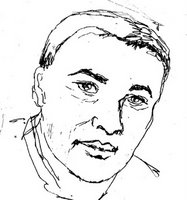 Hm,I guess I needed a gang of armed men to knock on my door last night at about 1 am , to realize that my security was next to nil and my dogs were on leave. This is all because my bro fed the cats and left the front door open , and APA was passing through the neighborhood and wanted to see me. ..Im not exaggerating , and I dare say I have been though a lot but opening your bedroom door and finding a huge hairy half drunk and armed cop(although admittedly he was limping after the coffin trip incident -) is one of those things you don’t forget.
He was rather sheepish about it, and polite though, which sort of mitigates the gravity of it, but heck Im going to check the doors from now onwards.
"Very bad security situation,"was all APA had to say giving me a really stern look.
Posted by aljuhara at 2:18 AM No comments: