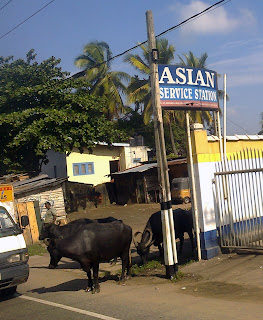 Theres a charming Sinhala saying that no matter how crowded a place is, when the King comes everyone has to give him space…you'll be tickled  to know that this is said in reference to that very Sri Lankan delicacy called buffaloe curd or "Mee Kiri" because no matter how sumptuously you may have feasted at a local festivity, and how full your tummy is, there is always room for a bit of curd & treacle! Its also called Dahi in India and it's a bit like Greek Yogurt they say, although I could not judge that ! Some do say that like the strongest addictions, it's an acquired taste, and personally Im such a fan that writing this blog is becoming difficult, without me wanting to run out and get some… but as a tip, the stuff sold in supermarkets is the sterile "official" version, whearas for the real smoky FLAVOUR of genuine Buffalo, nothing beats the "original" from villages in the  regions of Matara or Tissamaharama, in the South where wood fires are involved and this is made by traditional experts who have done this for generations!

That leads to another saying about pushy go getter people who make things happen , which is "If he wants it he'll go to Matara to get his curd tonight!" which is all about the extent to which someone would go to get hold of the real deal…

To make curd, buffalo milk is filtered and boiled, the scum is removed and it is cooled to room temperature. A few spoonfuls of a previous batch of curd are added and it is then mixed well and poured into clay pots.[1] Its eaten with kitul treacle, which is fruity sweet, which makes for a heavenly blend of tangy sour and nectar sweet, as well as a hypnotic mix of colors and textures! …and last but not least,what with traditional packaging is clay pots, and the buffaloes themselves living a comparatively contented lifestyle much of the time lazing deep in mud, which they definitely enjoy, Meekiri is perhaps more cruelty free and environment friendly than many other dairy products around!

Well, Matara is rather far off, so for now we're going to have to be satisfied with photos of Colombo buffaloes, which, as you guessed, are a bit of a nuisance in traffic. But I do love it that you can see rather wild looking beasts  like this on your way to work on a Monday morning! 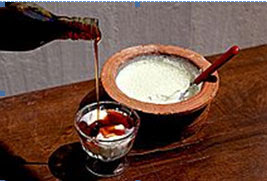 Posted by aljuhara at 8:26 PM No comments: