this is the postcard I designed for CVT , after going through a large selection of their photos; CVT wanted none of the old stereotypes of pain and horror, but rather a vision of forgiveness and hope. Her face has that timeless serenity.
Posted by aljuhara at 9:19 PM 1 comment: 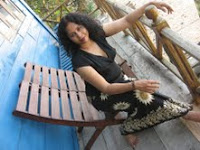 Name: Chandrika aka Pushy aka Aljuhara etc
Sex: Female, but I don’t accept any of the weaknesses attributed to the state.
Age: 38 looks a bit older, but feels a lot younger due to having lived life back to front.
Civil Status : Divorced in December 2004 after 4 years separated mother of two a lovely and cheeky daughter aged 17 who is quite capable of taking care of herself , and a naughty but sweet son aged 12 who likes to cook. The kids however want to stay with me and my mother in law is still a good friend as are all my sisters in law, so they are very much a part of my life and always will be.
Reason for divorce- obscure,but Im pretty sure I was the innocent party as boring as that sounds- I wish I wasnt !

Physical appearance: 5 ‘6’ 68 kg, 36-32-36. fair skinned, hirsute (you wont believe), frizzy hair(recently straightened fairly successfully but still wild) short sighted, a few teeth missing but so far all toes intact. Podgy nose. Excellent behind, I’m told.Have decided to experiment with Fair and Lovely cream on only one side of myself so if its working you will see a definite color difference.

Profession : ACCA finalist works as a Librarian, currently studying graphic design, journalism, web design, Arabic, and a whole host of other generally useless things
Education: till 13 schooled at various foreign schools including Norman Gordino in Kampala and a primary school in Manchester , Lindsay in Colombo, and from then on the world is my teacher. Would love to go back to school.
Religion:Humanist, Buddhist upbringing, admires all religious leaders, disagrees with Islamic ideas of practiced degradation of women. (Willing to argue on this topic for hours.) Gets along well with Christians Catholics, and vegetarians. generally terrified of Sri Lankan Buddhists as they have somewhat obscure ethics and tend in my experience to trample on you in their dedicated quest to stay on the "middle path"...
General Disposition: Cheerful, jovial, indulgent, honest, laid back, sympathetic, broadminded, understanding except where it comes to smoking
Vices : fickle. Dosnt take life seriously no matter how many hairline misses she suffers. Somewhat unhygienic, lazy and occasionally mean to small children, (only if trapped with them.) leaves used tea cups lying around and throws clumps of fallen hair and sometimes used underwear, behind book shelves etc. suddenly laughs and screeches loudly. Jumps to conclusions. Very bad singing voice. Useless at gardening – any plant dies if I so much as touch it.
Advantages : a very good telephone voice, good at soothing massages, anything I touch gets well soon- animals live- Excellent English , sense of humour if understood is guaranteed to bring cheer .does the counseling thing well, if the number of calls I get is any indication..
Likes: Sunshine, clean flat surfaces, sun dried kittens and animals of any type, milk, murunga, vaathathel, small onions, garlic, books and that row of second hand book shops in MacCallum Road, horror movies, Famous Fives, Tintin, Wilbur Smith, Alistair MacClean, Enigma Enya ,Spanish and Arabic Music, jungles, old monuments, a good cuppa tea, travel, writing and my black yamaha .
Dislikes : cleaning up after cooking, stuffed buses, cold rainy mornings , hypocrisy, being restricted ,confined or incarcerated in anyway, being suspected of lying (but to be honest it’s a long time since anyone dared to do so) & government offices .
Odd habits: taking tea and a magazine to the loo, smiling absently at no one in particular in the middle of a crowded bus, dressing in flannel.
Social Habits: avoids parties like the plague, vaguely disapproves of drinking and gambling- strongly disapproves of smoking and drugs, prefers to stay home with good music and a second hand book. Likes to go to temple but not on crowded days. Loves Latin dance but not very good at it

Seeking : a partner in crime. He should be : kind , intelligent, honest, a HAPPY PERSON dependable,caring,artistic at least 80 kg and 5’56’’ , preferably mid forties, should be divorced or widowed , preferably with kids, and he should understand everything in the above profile(even the murunga) even if he doesn’t agree. He should be willing to put up with lots of weird unsanctioned laughter and a few hippie friends, and actively support my cat farm and 2 dogs. .. He doesn’t have to have much money but a good bike would be much appreciated. but he must never make the mistake of borrowing money from me because I don’t respect that in a guy. He obviously has to be a person who appreciates good writing. Long hair is ok, dark skinned guys welcome, beards are no problem but nose and ear hair and mustos are OUT. Letters and calls and even meeting a few ex girlfriends will be tolerated even encouraged if it makes him happy. But, lying-never! There is just no need for lying in my home.
Oh and he has to smell nice.

I admit I sometimes read the marriage proposals section of our Sunday paper. In fact , with the cost of living as high as it is ,we can only afford one hardcopy newspaper a week and the trick is to make all the waffle last my current weekly reading requirements during those periods of digestive constipation…ok let me admit it I also occasionally half heartedly scan the horizon for a suitable partner..or is that just an excuse to find merryment in unlikely places..?

Im noticing a recent trend now where advertisers for both brides and grooms are beginning their spiel with the obscure and decidedly ungrammatical words “absolutely academically”… either they claim to be absolute academics or are looking for such.(whatever these are) mind you -Tough luck in a country where half the kids failed their O levels.
And to be honest I would not like to spend the rest of my life with an ABSOLUTE ACADEMIC whatever that defines. It sounds quite boring and miserable, a partner with no interest in cookery,karate, fast motorcycles or Latin dance. Marriage to an absolute academic would in fact be a dreadful excuse for life, a fate worse than death… in my books...flies droning in Latin come to mind...

But it makes you think – what is it with this Sri Lankan obsession to be at the top of everything?? Sominona next door advertised and it came below mine nyah nyah

Are you advertising here to spend your life with people who just may give up searching before they get to advertisements beginning with the letter “d” or “f”??
Im thinking, you wake up in the morning and say “ who am I going to marry today” or as the case may be “who am I going to make my daughter marry today” and start by reading all the first adverts beginning with absolutely academic and then your enthusiasm fizzles away and by the time you reach around G/B parents Gampaha district , statistically the chances are that you are asleep drooling on your chest …?
seriously , if that’s the case, folks, we deserve all the desperation we're in!
Posted by aljuhara at 4:07 AM No comments: