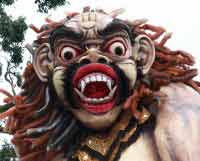 One evening a few weeks after their father’s death, Soma was lighting a lamp to a God in their garden, when she felt her wrist twist, like in a cramp. It was six thirty, that moment between dusk and night and the pain made her almost faint, and then both her wrists began to twist backwards, as well as the fingers on her hands, as though some invisible bully was trying to make her cry. And cry out she did since the pain was so intense, in the next fifteen minutes as she fell writing to the ground in front of the lamp, helpless in the grip of her own body which was spasming against her control, the extremities stretching unnaturally in impossible directions.
The pain was intolerable.
This was the beginning of Soma’s possession, and it did not cease though she was taken by her mother to a neurosurgeon , since they thought it was some kind of nerve disease. The free government clinic of course gave a date for a next appointment three months later, but since the medications were not working and the spasms continued Soma’s suffering mother begged money from her brother and took the girl to a private clinic. They found nothing wrong but listened in vague disbelief as mother and daughter told of how the girl’s body would contort in incredible positions. Her involuntary screams of pain too would be unnaturally guttural as if an angry man was shouting from her throat, which they thought was due to the pain involved.
The doctor gave her various sub classes of vitamin B, lots of it, and it made her nauseated. Within a few weeks as her family watched in helpless horror, the grunts and shouts of pain she made were converted into inexplicable Sinhala curse words which Soma would never have dreamed of uttering in her sound senses. The kind of words that the dirtiest thugs in the meat market would have used in a drunken brawl. Words which she didn’t even know. Her mother and sister figured it was the pain which made her swear like this but couldn’t understand how she developed a man’s voice; it was a fairly familiar voice too. She sounded like her father had, those days.
The village elders understood what had happened.I was a witness at the exorcism of Soma and it was an incredible fight we witnessed. Imagine the background of drums, gruesome masks and coloured lamps, a slaughtered cockerel, and the oil painted exorcist chanting century old mantras to evict the possession. It was her father possessing her, and he was a cruel drunk village thug who had beaten up his family members often and taken their food money for his gambling. He was also accused of other darker crimes abusing his daughters which no one could even speak about. He was dead, but he was not ready to give up the evil his life had brought to their family. He made her body behave like a monster intent on causing her pain, and twisted it self into contortions which were painful to watch.
She hoisted her skirt up like a thug in a drunken brawl and climbed onto the roof of her house from where to shout unspeakable obscenities in the midnight ceremony, weaving drunkenly across the roof, so that eye witnesses were praying that she would not fall. The evil entity that had been her father said it would continue exploit her, would not leave ‘ his family’ and would not let go, he demanded that they serve him they were his ‘property’ he said.
The Kattadiya(demon-priest) and the entity fought a three hour long argument, where Soma’s body was the battle field and her pain was of no consequence, and at the end of the three hours it seemed like the evil entity was winning. Soma’s mother rocked and keened in tears of anguish as she heard bones break in her daughters body and watched her hang like a rag doll across the roof tiles. Nothing seemed to be working, and the possessor kept insisting that he had the right to stay.
To be continued
Posted by aljuhara at 4:44 AM No comments: