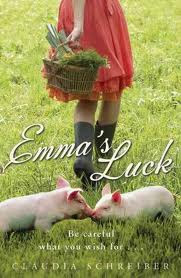 …one of the sweetest wierdest funniest saddest most REALISTIC little tales Ive read to date, totally blew my mind– I can hardly begin to describe it. It has a farm, hideous memories of child abuse, fantasy, horror , love, hate and pancreatic cancer and yet….it manages to be funny too ! –not an easy combination at all but perhaps it's the real dialogue that does that

"but you wanted a chicken didn't you?'

"would you rather cook it with its head still on?"

"Do you want to put the chicken in the wine alive with its feathers and all?"

"No I want a proper chicken from the super market , or even a freezer , a frozen chicken wrapped in plastic"

"so how do you think the chickens get into the supermarket and freezer? Suicide?"

Emma is a wonderfully practical strong and kind character , putting Eat Pray and Love into the shadows with her own sweetly psychotic  blend of "live, kill and laugh" – at one point in time she reminded me of the mad nurse in Misery but in a very positive honest way and I was actually worried for her new pet…her fantasy is to save her farm somehow for which she needs money, and to find a man- both seem to be answered one day when she finds a crushed Ferrari in her potato field with an unconsious man in it…

You will relate to this if you are an animal lover, or a strong single woman or someone very  afraid of terminal cancer…this has all three. And lots of squealing cute piglets. Who become "Happy Pork" And a unlikely characterful rooster who is possessive about Emma. And a unlikely beau named Max who slowly gradually, reluctantly,  falls in love with Emma.

But from then onwards the story that develops is absolutely unpredictable, is all I will tell you

Emma's Luck had me gasp, and hold in tears  at one point and its been a long time since a cynic like me could be moved that far. 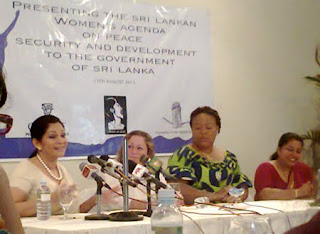 There is a superstition, I hear,  in west Africa that if a elder/married woman bares her backside at you, you will practically turn to stone or be so cursed that you are as good as dead.- men who are exposed are considered dead. No one will cook for them, marry them, enter into any kind of contract with them or buy anything from them according to Wikepedia.  Well, today I learned how this and a threatened sex strike allowed a lady named Leymah Gbowee to strengthen a women's peace movement that successfully quelled the Second Liberian civil war leading to the end of the cruel dictatorship of Charles Taylor ... and brought to power Africas first democratically elected female president, Ellen Johnson Sirleaf. A stirring documentary  film,  Pray the Devil Back to Hell released in 2010, highlights this saga, and its one film I intend to get my hands on this week.

Along with Ellen Johnson Sirleaf and Tawakkol Karman,  Madam Gbowee went on to win the Nobel Peace Prize for 2011 for her " non-violent struggle for the safety of women and for women's rights to full participation in peace-building work".

Nobel Laureate  Madam Leymah is currently in Sri Lanka and will be participating with the Association of War Affected Women in presenting a  Sri Lankan Women's Agenda for Peace Security and Development to the Government of Sri Lanka, in Kandy today.

When we asked the charming Leymah what her message was to the women of Sri Lanka, her answer was simple " Put aside your differences, of ethnicity, religion, caste, class, and stand together to demand what is right for this country and for your children!"

Posted by aljuhara at 8:16 PM No comments:

Dusk merged into intense darkness as the bright lights and the rhythmic beating of the drums soon drowned out the horrified gasps of on lookers. The Kattadiya and the broken white clad figure on top of the roof continued their arguments. Under the control of the evil entity, the eyes reddened, mouth foaming and sweat drenched figure was now home to not one but two souls, one of the daughter and one of the father who was evil beyond belief. All his life he had been a cowardly low life thug, but now death had released him from any inhibitions about the law.

The exorcist  in turn was not ready to back down. He began to mock the demon. He provoked the entity by poking fun at his choice of victims. "Have you no shame to possess this little girl? You think this is something great? Any other man would possess someone far more difficult to control." For which the rasping voice replied "This belongs to me. And I shall do with it whatever that pleases me! I always have done whatever I want! " this compelled the entity to further prove his point by shaking and jerking the body violently. Anger aroused in the entity seemed to be dangerous but, the kattadiya knew what he should do next. He began playing the 'straight-man' and directing clever and crude insults at the spirit.

His aim was to invoke the spirit, to believe itself foolish and deprived of significant intellect as compared with others. The wordplay used continued to disorient and confuse the spirit. He continued to degrade the actions of the spirit as though they were done by someone mad and stupid so that the proceeding conversation resulted in the loud outbursts of laughter by the audience. The tension of the atmosphere began to lessen as the on lookers too joined in the verbal insults with loud wolf whistles and applauses as though the whole enactment was a drama done to amuse them and not scare them. Many crude words escaped the girl's mouth in that frightening voice focused at the kattadiya. But the amused atmosphere of the crowd proved otherwise.

The Kattadiya conducted this drama well, under the logic that what you can't take seriously, you can't fear.

Finally…'Look at you, running about in a woman's clothes," jeered the kattadiya which was accompanied by hoots from on-lookers 'who would have thought that the great tough Barawe Chandiya, would finally be reduced to this one day? We can see your frilly knickers!'

This was altogether more than the entity could bear and a spine tingling roar of frustrated rage shook the air as the body lifted into the air, went limp, fell to the roof and  began to roll off  as though it weighted as much as a rag doll.

Men nearby, cousins of the unfortunate Soma, managed to rush to the spot with an old mattress with which they managed to catch the body of the girl before it fell brokenly to the ground. They laid her on a white cloth so that the unconscious girl was safe. She was thankfully still breathing and very much alive although some of her bones in her fingers seemed to be broken. The kattadiya continued to chant certain prayers and charms in order to build protective barriers against any future intrusion of the evil spirit. More charms were placed around the outside of the house, to ward off any bad spirits, demons or other misfortune from coming closer to her as she was in a weak state.

No further paranormal activity was reported by the family and that the girl in time recovered from her physical wounds. A cleansing on the house had been carried out and a priest had preached 'Bana' in order to calm the mind of the unfortunate girl. The family and relatives sadly admit that the girl never did truly recover from the ordeal and the fear she had for her father. And of course she was fated to be shunned by traditional society and no one would marry her because she was supposed to be 'the one who ran about hoisting her skirt'.

Posted by aljuhara at 9:49 PM No comments:

an unfortunate series of , no wait, a really tragic, useless, BLOODY INEXPLICABLE series of events..

Another wierd link I stumbled on when researching that story...http://www.srilankaguardian.org/2010/08/soldiers-view-part-two.html
And here is the text of the clip which I wanted to find
Police in Anuradhapura have arrested two suspects in connection with the rape and murder of a pregnant woman.The victim's body was found hanging from a tree near Kandy Lake on July 27.The 40-year-old, who was mentally unstable, had left her Hanwella home following a dispute with her husband three days earlier.
--
Well, Journalists do mess up more often than not.  this story is sad on so many counts, since the woman was not necessarily mad as it not so subtly implies here, and there certainly was no dispute with her husband, who I know for fact is as grief stricken as a man can be- and also because she was pregnant with a son they had dreamed of all their lives, and in might actually have been this unborn son which caused her death. Wait, you say, murder, rape,and  youre blaming a  fetus....?!?Well I shall tell you how it happened . What made me so shaken up was the whole pointlessness of this death, the whole glitch in circumstances which need never have happened and yet they did, leading to the needless misery of so many people, not the least of whom are the 2 young rapists/murderers who I kid you not are currently suffering physically at the hands of the Sri Lankan Police as we speak ...

I dont know why this kind of thing happens...co incidences which make and break lives, I cannot explain them and you will understand my bafflement when you read this story, which you have to believe me is true. Im not a journalist, Im technically their neighbour- the best source.

This book of mine, which begs to be written, begins with a Dastardly Murder and Rape (not mine and not in that exact order) but I admit it shook me up. Remember the land I told you I bought, in Hanwella. It made me so happy...according to the UN or something, only 1 per cent of the worlds land is owned by women, astounding as it sounds. well thats food for thought since you will agree it is land that sustains life....anyway, about the land I bought in Hanwella near a large stream and rubber tree estates, so picturesque with water buffaloes furrowing about nearby , endangered and migratory birds crooning from the trees and a rumored family of small esturine crocodiles in the stream? well for the price of about 1500 Dollar, I owned a small patch of Gods Earth, where I could finally lay my bones some day in the hope that they would not be disturbed. Thats what I thought and still think...but now to the murder.
Its quite a sad story with hints of occult, and crimes of passion and it makes you think about life and love and being at the wrong place.
here is the small clip she was afforded online http://srilankamirror.com/news/710-2-arrested-for-rape-murder-of-pregnant-woman but there are much more detailed stories in the Sinhala papers (local audiences just love some good gore, Im pretty sure my idea for a  paper with only good happy  news will not sell much in this country- or heck , anywhere) ...
anyway the full story goes ....