Firstly, I would like to thank you for visiting us once a year and giving us presents. That's really sweet of you.

In all my early letters, I have asked for things like "elimination of pollution" and "increase of moral values in mankind" and "better treatment towards animals and women" but I think none of it has happened.

Men, women, children, animals, plants and earth herself is dying of starvation, wars, abuse and all sorts of nasty things. So I take it that you probably have a lot in your plate and that's why it's still going on. I hear God is pretty busy too. I don't read the news or watch television much but from what I hear Daddy say, the world has become pretty much a poop hole. But not in so many words. Id have to put a penny in the word jar if I said the word he used. That and I probably wont get this years present from you too.

I wrote a letter to God asking why he hasn't looked into all these stuff that's happening. I didn't get a reply yet. He's probably busy looking into it. So I thought I'll try you.

There is this picture I saw on the internet. It's very sad. I love animals and I even have a rescued kitten . Seeing this doggie like this made me wanted to cry out and hug my poopsy. I don't understand why anyone could do such a thing to a sweet soul like this. I mean, look at those eyes. What wrong has this doggie done to receive such treatment? What moral misconduct has he done to be treated like this? I don't know the whole story behind it but maybe he stole a loaf of bread or something and he was kicked out on to the streets. He has all sorts of wounds in his body and I cant for the life of me imagine what would have made such horrible wound. Doesn't anybody know that it hurts the same way whether they're humans or animals? I hear people throw gasoline at doggie's backside so that they wont get more puppies. Is that true, Santa? Do they really hurt these defenseless animals like that

After several months of poor treatment like this, someone had come forward to rescue this soul. It had been a group of people who go looking for injured animals who had taken this poor animal to their shelter to try aand help them in any way they can. This would have been difficult as nursing sick animals back to health is quite expensive. ( I should know, Poopsy was bitten by my doggie, Mickey and had to be nursed back into health. Poopsy cant use her right leg now but apart from that she's perfectly fluffy and happy. Daddy paid quite a lot to get her better again)

Apart from rescuing puppies they also hold sterilization camps. I think what they want to do is reduce the number of puppies on the road so that poor doggies don't have to starve and suffer a lot. But some people don't like that too. Because apparently it is against God and it is his will that girl doggies have babies without being stopped. I don't think God will mind . Because at the end of it all, they are helping the doggies by eliminating the beginning of suffering. 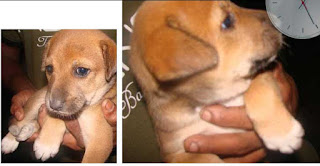 Some ask them why they do it for animals, and why not human beings, like children in the cancer hospital. Yes humans should be given priority compared with animals but don't animals feel pain and distress just like we do? Don't they also feel hunger like we do? Don't they like to get a decent bone or two to munch once in a while? Don't they feel pain and sadness when pelted with stones when they try to make friends with you? I think love and compassion should be felt towards animals as well as humans because we both feel the same things in the same way although we don't communicate it in the same way.

This group of loving and caring people did come forward to help this dog. Not just him, but many many doggies on the road. Some with terrible wounds like these and others who have been dumped on the road by mean people. What's more, these aren't those fancy wooly doggies you on magazines and TV. People dont hesitate to take them home even though they are very expensive in buying as well as maintaining. But what about the street doggies who have no one? They need someone to care for them too.

So maybe God does send his angels on and off to help around. And he does show that whatever someone does, may it be a giving a biscuit to a cat whose starving on the road or offer a ride to an old lady, if they do it with a good heart and in the genuine hope of giving someone a helping hand, it makes a difference.

Maybe it doesn't have to impact a whole group of people or create a huge announcement in mass media. Maybe it'll just touch one soul in a way that makes that his or life a happier place even if its just for that one day. A small group of thoughtful people can make a difference.

It is a fight for them. Money is a major issue. Social opinion is another. But I don't think they are willing to give up just because they don't have any money. They cant help all the sick doggies in this country. But they are trying by beginning somewhere. They know what they do will change the lives of atleast one soul that is need of help and comfort. They cant do it all by themselves. They are called Adopt a Dog in Sri Lanka. And they need your help.

I'm sorry if my letter is too long but I needed to tell you everything. And for this year's Christmas  it would be make my wish come true if you could help them out.

--visit their page on fb on https://www.facebook.com/adoptadoginsrilanka

and explore how you too can make a difference for a street pup this Christmas.

Posted by aljuhara at 7:00 PM No comments: