How to make a couch potato dance…

Consider potatoes.
I myself have a relatively small family to take care of, catering wise, and that too only in the weekends. It ranges from four to seven people (not counting the cats dogs squirrels and occasional tortoise who stays-)but I have repeatedly had to confront so many potatoes in my life that they sometimes come close to boring me.
I view them as fleshy, bearing great taste potential but rather repetitive.
To housewives I think you may agree while the potato is plain and uncomplicated - it is also dependable. If you have potatoes you can definitely do something successful with lunch, your day has been saved...
They ve been around since the old Mohenjodaro Harrappans dug them up Im sure, or the Irish ,discovered them in their bogs…the French fry them, the British mash them and in Sri Lanka we oil them…anyway, the fact that I am writing and you are reading about potatoes perhaps reflects on how predictable and comfortable our lives as housewives or working women has become….plain, dependable, pleasantly starchy and …taken for granted…
Perhaps occasionally we should change that. Go out there and do something different, escape from our comfort zones and test new waters…take a dare!
As you probably know if you have read my previous articles, I do occasionally go out and get involved in something wild, just to break the monotony (perhaps of potatoes?) – years back it was Karate, and I still don’t have a belt, although I know a few moves, and have actually been unlucky enough to have to use them….Then there was the motorbike which became rather dependable and useful so whereas Im no racing star, I do get around “faster” (as one of my colleagues once said slightly tongue in cheek ..)
And more recently it was the Salsa.
My dancing I believe can only be described as torture to watch but unfortunately for the audience, I do still enjoy it very much. I try to tell anyone who listens that this is a truly fun filled pastime but most of my friends develop a glazed, politely condescending expression and smile, for some reason I am yet to figure out. This is why I thought I would wax lyrical in this article about the wonderful power of dance.
Dance liberates your soul. There are those moments when you get a complex step correct and you feel totally on top of the world. Possibly you will never go on to be a world champion but the whole point is the amount of fun you have along the way…isn’t that like life it self?
Dance mirrors, on a happy and mercifully small scale, the complexity of life itself.
You go out onto the dance floor with a partner you have agreed to dance with, ; from dance to dance you may be “seduced” by what seems like more attractive invitation from others you may or may not want to dance with or you may keep eyeing someone across the room who seems to have the most wonderful moves…you may find your self dancing alone because everyone else found partners, and yours couldn’t make it,(often the story of my life-)or you may find that you are the life of the dance and everyone wants to dance with you but you cannot oblige…ultimately at the end of the day you will wake up to a couple of inalienable truths …that the fact that you don’t have a partner need never prevent you from enjoying the music….And then….if you do have one, the longer you spend with one partner the more you understand each other and the more relaxed you are , the smoother your synchronization and the happier your dance.
Oh if only people understood this there would not be so much jealousy, possessiveness, infidelity and cheating going on in real life; I do believe wheras dance is easy going and obviously not hampered by legal issues, it does open your eyes to the value of “monogamy” although this is only a happy virtual world, a sort of laboratory on life and not the real thing…dance I believe is a wonderfully light hearted parody on life itself.
I don’t intend to judge my friends but I do see a lot of pain in their romantic relationships, which I do believe is largely unnecessary, which should not be there in this beautiful dance called life. I see many young people rushing into relationships and marriage perhaps goaded by their well intentioned parents, perhaps compelled by mistaken infatuations, and then life becomes a long journey without music. So many of us have forgotten the vows that make a relationship sacred , but have to live double lives of lies, deceit hypocrisy and finally real loneliness. But why is this? Life is meant to be happy, music has a power to uplift any spirit and dance, (even if you have no where to do it but your own living room as in “the sunscreen song”)…has that irresistible charm of its own once you let it get a hold of you.

On a practical down- to- earth note, for fitness enthusiasts, dance will keep you addicted so that your workouts are enjoyable and not something you dread, for shy people who like to meet friends this will build your confidence and your networks, and for the occasional people watcher like me this is a fascinating theater on life.

So maybe its time now to convince your better half to join if you have one, if not just bully any suitable friend into joining , buy yourself a pair of dancing slippers and come join the fun.
Posted by aljuhara at 5:21 AM 5 comments: 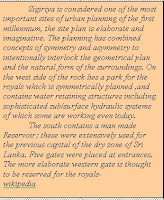 Sigiriya…
What does this name invoke in you? Is this picture about a place or about a person? A heritage or a human? For me it brings an eternal sense of awe, a silent marveling, curiosity and a breathless freeze on time. I shut my eyes and I can see this paradise from a time long ago.
Quite, for a moment the din of vehicles, media and bustling Sri Lankans caught in this modern frenzy of activity , and please switch off your mobile phone.
Sigiriya will take you back in time, if you still your racing soul and let the orange afternoon scenes take a hold of you. Haunting earth colored pools, sunlight slanting across flat green gardens and an atmosphere thousands of years old. Can you hear the princesses laughing and playing in the water?
Remove for an instant the paraphernalia of modern civilization, your plastic bottles, gadgets, denims, IPods, Nike, Nokia or whatever; lead your mind gently back through the ages to a time when life was enjoyed at a slower pace; you have heard about this so called God- king who built a wonderful fortress on a rock a thousand feet into Ceylons light sapphire sky….think, every inch of its architecture fitted to a complex logical plan of breathless esthetics and practicality ,a breathtaking union of science and art, two thousand five hundred years ago.
This is what your ancestors accomplished.
Sigiriya was constructed using only Ceylon’s bountiful natural resources, there were no imports, no foreign consultants, no bribery and corrupt contract deals, no electronics, no computers, no construction equipment and no animals (or people) were harmed in the production of this paradise on earth. Or anyway that’s what I like to think…
Time for me, warps gracefully, around Sigiriya.
Yet I have a thousand timeless questions ….
What was the king like, and his Queen? Did she poison him or was that just defamation? Did he kill his father or was it because his father was trying to kill him that things happened like this? Are there descendents of his walking, driving and cycling around Dambulla, and do any of them resemble him even remotely (after all, he was supposed to have had 500 women and there was no “family planning”those days added to which birth control was probably not high on his agenda) (and anyway what is it with successful men and their drive to accumulate so many women in the first place ?) and lastly, if he reincarnated ,and I do believe in reincarnation, is he walking among us? Was this really about brother killing brother and are they still involved in that perpetual conflict?

I first climbed the rock twelve years ago with my daughter who was an infant and came tripping and tumbling happily along in a frilly white cotton dress. We dragged her to the top, her father and I , each holding a hand when she stubbornly insisted on not being carried, and allowing her to swing gleefully in the space between us, like a small primate. Predictably we were accompanied by relations, my in laws, her cousins , impish, skinny twelve year olds and I was a harried young housewife of mid twenties, those were what should have been the best years of my life.
So much has changed
My daughter is now taller than me, and sometimes looks after me, her cousins, the cheerful tomboys who argued their way up the steps clicking with complicated Japanese digital cameras, are now doctors, and one is married,; I have changed from a naïve, insecure young housewife , to an independent and self confident adult; I think, watch, appreciate and note life around me the way I have never seen it before.
I have learned so many lessons in life, they have changed who I am. Like a river which from moment to moment changes its composition, there is almost nothing in me of the girl twelve years ago, not even the physical features.
But the Rock Citadel somehow, remains the same doesn’t it.
Thousands of feet attack the steps each day , possibly more than King Kassyapa ever thought possible, and the steps are just as strong and stony now as they were then.
Hair rising accounts of bright ideas of turning the Rock Citadel into a Disney style theme park have thankfully been quashed,(for now anyway) and citizens mercifully have had to stop writing on the mirror wall, an old form of self expression resorted to in a time before internet blogging…so the Rock Citadel will have more time.
I don’t know how long this treasure will remain unchanged in this our modern atmosphere of smoke, pollution , global warming and mindless greed.
But I feel very privileged to have been there, seen it as it was.
I also feel I’ve been there before, sometime long ago….
Posted by aljuhara at 8:40 AM 1 comment: