WALPURGISNACHT Having a devil of a time 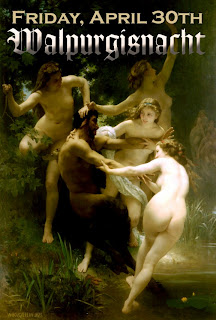 Walpurgis Night, and the risks of being different

April 30th which fell last week, was although few modern people know about it, one of the biggest days in the calendar of the ancient witches of Europe in the Dark Ages; or that's what is claimed. It sits at  the exact opposite of Halloween or All Hollows Eve, which is October 31st and six months away, and much better known the world over.

Witchcraft in Sri Lanka is not a domain of ugly old women, and in fact some of the best known and ' most effective" sorcery is attributed to witch doctors, kapuralas (attendants to the Gods, who actually know their language ) or kattadiyas/gurunanses (witch doctors/demon priests) as the case may be. In practice also, such people have always been held in great esteem and even if they are mostly confidence tricksters, they are paid vast amounts of money for an exorcism or a spell. ( Ive heard that a good one can cost upto USD 7000) So, in general,  Sri Lankan 'witches' have it lucky.

However at a certain time long ago in the history of ancient Europe a powerful hysteria went around among ordinary people who feared that certain women were in league with the devil and responsible for the death and destruction that befell either crops, farm animals,  families or entire towns and villages.  We now know that the Black Death or bubonic plague for just one example was caused by a regular microscopic germ that lived on the fleas on black rats, but in those superstitious and uncivilized times, people preferred to think that this was the work of the Devil and since he was unreachable in practice, they took out their frustrations on some ugly or quiet woman in the village.

Indeed the words 'witch hunt" even now means "searching out and deliberately harassing people considered unorthodox(or different) " in society. So basically this was a situation where no one could win in the end. If you were even marginally different you ran the risk of being accused of being in the league with the devil. You could be extra pretty, extra ugly, have a squint eye or a stutter or a baby brother who walked funny – and bingo you were targeted for torture, flaying(ripping your skin off), scourging(beating your skin off)  and execution at the stake(over a slow fire)!This means  whatever bad stuff that happened in the village like farmer Bills cow dying of foot rot, was your fault , you could be a witch!  But if you did not want to be different you had to agree with the crowd, and say that yes, the pretty girl up the street, or even your quiet aunt Sally with the three cats, had to be a witch. A truly horrible choice, again, because the results of such a conviction were not pretty. This was probably where they came up with the saying being "between the Devil and the deep blue sea"

And this persecution of women, was completely gender biased.  Women had been thought of for very long as inferior and common perception was that they were more susceptible to foolishness and sin. The Devil was a male personification of evil and would prefer female assistants. The prosecutors were mostly male, sometimes celibate, as affiliated to the Church and extremely sanctimonious in their accusations , indeed the more women they tortured and burnt, the more holy and virtuous they felt! Including a number of pretty village lasses who had rejected their advances. .. since there was no decent media or internet to correct the more absurd speculations made by people, the stories conjured up and recorded became quite wild indeed, limited only by the imagination of the scribes and citizens of the era.

So, coming back to April 30th,  the eve of May Day was a date when the so called "Grand Sabbat" was held, which was considered the biggest festival of witches, involving anything from 10 to 10,000 invitees usually held in some Baltic forest high on a mountain called Brocken in North Central  Germany for example.

The Devil appeared as a huge black bearded man, or a black goat (!?) or even a humongous toad… He sat on an ebony throne and his witches gathered around. There were the usual formalities such as initiation of intern witches and punishments for those who had not met regional disaster creation targets, and then everyone brought him presents (they had to be black in colour, so you need to try finding black food coloring if you want to take him a cake) . There was also an ultimate act called osculm infame, (which you can google and find the meaning of, if your parents allow you to do so.)

Finally the party, but since it was the sanctimonious and fun-hating religious paragons of the time reporting this, none of the food had any taste, and the participants were hungry anyway. (Something a bit like the pretas of the East who never enjoy their food or get satisfied no matter how much they eat.) And then there was dancing, around a bonfire or the Devil or a Maypole, or some kind of pillar, which lead to worse things. That's what they claim anyway. Who knows maybe they did have witches, or maybe bored groups of people who were somewhat different and needed a ball, what with all the death  and misery going on around; these were after all the Dark Ages!

Authors note: some of the best Hollywood fare around depicting this inglorious and ridiculous era, includes "Black Death" and "Season of the Witch", which you can view, again, if your parents allow you to do so, and if you don't mind being depressed to death.  On a happier note, "Walpurgisnach"is celebrated in a much more fun way by modern day Europeans who camp out, make bonfires and sing and dance the night away…

Ps- dig the artwork- Satyr type fellow is clearly loving it -
Posted by aljuhara at 1:33 AM No comments: