Introducing you to the modest Wanapetha "Resort" which is actually a restaurant, affording  tasty hygienic local fare, complete with the fried lake fish from the nearby reservoir . You can find this cute eatery on the Tanamalwila Road, next to the Udawalawe Police Station.( Colombo Monaragala Route, and there is a bus halt right nearby where the No 98 halts from Colombo)
Adorable simplicity in eco-design more than makes up for the lack of luxury and the simple but delicious local fare, served out of clay pots, includes brown country rice, with favourites such as bitter gourd curry, winged beans and Murunga when its in season,and is absolutely welcome for a tired traveler.
Enjoy a breezy respite from the heat, within the eatery before you head back to elephant-land.
Posted by aljuhara at 2:16 AM 3 comments: 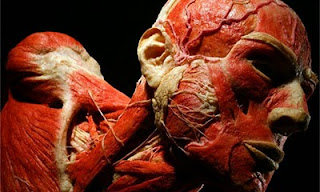 The University  is such a beautiful place, sprawling acres of lawn and the most incredible trees and flowering plants, this looks like a little bit of some other country, maybe England…except of course you see the demurely dressed local girls, who are made to wear long skirts and till some time back were not allowed to wear jeans, for fear of being ragged. And there are occasional tropical plants too.

I don't know whose idea it was to come up with an exhibition of dead bodies, but some bright boy did and let me tell you it was a roaring, jam packed success. People, it seems, love to look at dead bodies. What else would make it that popular? I don't understand us people, its just like when there used to be a bomb blast and we would email around the photographs, or more recently, the mobile phone movies. I have to conclude that we are actually ghouls ourselves, admit it ?

In 2009  there was this 'dead body' exhibit and I remember joining a group of cousins and travelling all the way to beautiful Peradeniya to see this, at their urging of course, boys seem to enjoy being all macho around disgusting things. In fact one of our cousins was a medical student who was in charge of one of the sections of the bodies exhibit and he had managed to get us in without tickets, not that those were expensive really, but it was another element of fun to the boys.

The rooms of the exhibit area were jam packed, full of families, which made me really fear for the state of the Sri Lankan entertainment industry. The turn out was just way beyond any movie or drama launch or bridal fair! In spite of the smell! I mean I can remember that cloying truly sickening smell even now as I write this down, staying at the back of my nostrils and slowly draining like custard, down my retching throat! It was putrification, bowels, and lots and lots of preservative chemicals mixed in, a smell like no other and our rather amateur med student exhibitionists had taken no real pains to seal it away. Well I have to agree, it was a dead body exhibit so what else were the public supposed to expect anyway?

So here for those that dared, were laid out the very innards of our mortality. Slab upon slab of post mortem humans, people like you and me, who had previously laughed, cried, been angry jeolous, in love, but who were now past the expiry date and alas , not allowed some proper rest even then. Some of them were cut open with white and brown bones jutting out of gaping autopsy mutilations. Glistening organs were laid out in trays of thick brown fluid for those who wanted to study anatomy. Im pretty sure though that no one came here to figure out how their liver looked like because really who cares, and there is a reason these things are wrapped up in skin and never seen, and its because they are simply disgusting to look at. Our med student cousin however seemed to think different, and actually picked up a brown and black organ he said was the heart, which had been sliced down the middle and showed us some hedious hollow tubes which were main blood vessels of some kind. I really didn't want to know, that was their business. Some thick stinking fluid was leaking out of it as he prodded and his gloved fingers were coated in it, so we reminded him kindly to stay at away  from us. He was completely enchanted by his lecture and didn't notice that thick blobs of this stuff were splashing here and there as he spoke. I wondered rather dis-enchantedly,  if starry eyed lovers knew that this ghastly, putrid tangle of tubes was what they kept promising each other on Valentines day.
There was also the "Cholesterol" exhibit, which was actually a very skinny young man who had died of a head injury and was thus headless,  but had very recently died, whom they had cut up to show the amount of fat in a human body. It was crazy. The fat was in thick bright yellow slabs like the ghee you see in supermarkets. I shut my eyes and imagined some overweight people I knew, possibly their innards were all buttercup yellow!
The most interesting was the criminal victim's area. These people unfortunately had no identity, no relations to claim them, no name; so they had been appropriated by the exhibition.  One of them was a completely dried out crusted rigid mummy of a skinny female corpse, which seemed to have been a burn victim and was curled into a fetal position and absolutely stuck in this rigor. Interestingly there was a britle white plaster like substance sticking to her limbs at various places.

"This one moves," said my cousin with a completely straight face, surprising me considerably since I could not dream of any situation in which this wood hard corpse could possibly move. The other fresh ones, yes, but this was as cold,hard  and brittle as a dried tree trunk  " In the morning she is in a different place. It has happened a number of  times. I have asked the Professor in charge we should really retire her. I think her spirit is very restless and it is here, unlike the others who have left and moved on. This one is spooky."

I gaped at him in awe. " You mean the other corpses are NOT spooky?" I asked
" No, not to us, we have an intuition about this, this is science, we don't think of it as dead people we think of it as so much meat, like when you are at butchers the way you think of a side of pork or chicken breasts. Or if you buy a handbag made of crocodile skin, its inanimate. But this corpse may be haunted. She was a murder victim you see,"
"What happened to her?"
"Her husband murdered her because he wanted another woman, and they hid the body by cementing a stove over her ; she was left there for 20 years as these two ate drank and were merry in her own home. Police and relatives were told she ran away…imagine what this poor woman had to go through. The body was only discovered 40 years later, when the man had perished, theoretically poisoned by his new wife, and she had then sold the house and gone away. Someone at the police morgue handed it over to the university since there was no one to claim the body. No rest for this poor woman, not in this life and not in this death. That's why I say this bit of corpse is haunted I think someone should say some prayers over her and cremate her. Before something bad happens."
As I think of that interesting exhibit, and our outstation trip, I do hope they have done so, because the thought of what that poor woman had to live with and the purgatory she suffered after her death is very sad indeed. Little wonder that particular cadaver was restless...

Posted by aljuhara at 2:00 AM No comments:

There is a beautiful stretch of country road, from Hanwalla to Seethawaka, in Sri Lanka as you head for cool Avisawella from Colombo .
Apart from the impossibly green paddy fields and divine river bathing spots, Seethawaka is also a land of rather gory Sinhala legend. The town Hanwalla itself has its name from "place of drying skins" and its probably not animal skins we are referring to here, as some of the old Sinhala conquerors were quite cruel. You can let your imagination take over! Another beautiful town, Labugama, was actually named when a prince once said something like " Oooh would you look at that, it looks like a pile of Labu fruits…" in reference to a large pile of the heads of enemy soldiers…and Seethawaka itself was the place of a famous battle of yore.
Among the reeds, on the side of the Kelani river you can also find the neglected, modest tomb of an ancient  Sinhala king of Seetawaka . Not only was he guilty of boiling a few holy monks in oil because he suspected one of having an affair with his queen, he also once played a trick on his harem and signalled from the battle field that he had lost the war and was dead. The distraught queens all jumped in the river and killed themselves, which must have left him rather numbed to say the least. His tomb is very discreete and has a sad little wooden stick fence round it so you cant imagine that this was a magestic conqueror and VIP personality of many hundreds of  years ago…
However the cool river lined A4 road is now peaceful, bordered by micro sized tea and rubber plantations, bamboo groves, and gorgeous little coconut leaf-thatched road side shacks selling boiled corn, clay items and fruits.
Hanwella has a couple of cute holiday spots like the Natures Resort Bungalow , an Eco Resort named Ambalama, and you can see waterfalls, lush green hills, paddy fields and cool rubber plantations as well as two beautiful reservoirs  which supply water to Colombo ..and so many country roads in paradise.

Posted by aljuhara at 6:48 PM No comments: