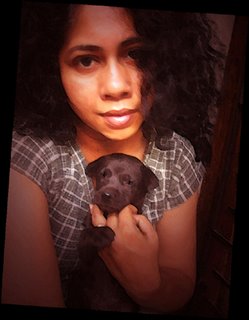 "some of the most interesting people I know still dont know what they want to be at 40." - the sunscreen song

well, I know what I want to be, and that is ,in a word : PUBLISHED!
Posted by aljuhara at 9:12 PM No comments:

Im Chandrika.
Well I used to be someone else but now Im Chandrika, and I want to write.
Hey Ive wanted to write since I can rememeber.
Hey wait a minute - the nice thing is Im writing now. ...
I ve also wanted to ride a motorbike since for as long as I recall and Im doing that.(Ill give you the detials in time-)
So- what can I say - Im one happy cow!
meanwhile, the next thing I really would like is for you, the dear gentle reader to actually read what I write.
If you need to know what sort of stuff I write ,well, it has to be fun.
I have never written horror, although I love to read horror and love watching horror movies, the sillier and more grotesque the better...
MY favourite authors? Terry Pratchett, Alistair McClean,Herge, Stephen King and Enid Blyton.
Theres more about me in this blog , why not just go to the main page www.aljuharawrites.blogspot.com
ENJOY!
Posted by aljuhara at 6:53 PM No comments:

murder in the library


Will the CPA Staff member who willfully took a box of new library books and threw them all over the library table ,during the weekend ,please identify him/herself without delay.
We will be pleased to organize free counselling for you if there are unresolved childhood issues - however if this kind of behavior is repeated my simple solution will be to lock the library during the weekend so no one can even access the nice clean loo upstairs.
thanks and best regards
Chandrika Gadiewasam
Librarian

Dear Valued Staff,
My apologies for causing a furor this morning - apparently the large scale
vandalism during the weekend has an innocent explanation - good old Aunty
mallika is involved ....and one of the cleaner kids who has tried to wipe
the fan blades and fallen onto the library table...sigh...sorry guys, its
been one of those weeks for me and the last straw is to have walk in on a
battlefield with my precious book lying around dead and dying...you do
understand...
thanks and best regards,
Chandrika Gadiewasam
Librarian
Posted by aljuhara at 8:58 PM No comments:

this entry has been deleted becos I changed my mind.
Guys, I reserve the right to change my mind,ok?
its a fundamental right as my friends at CPA would say
Posted by aljuhara at 8:52 PM No comments:

Newbie called me yesterday. He often calls me in the evenings , since I met him, just for a chat.Just to see if Im ok. He asks nothing from me,not even that we ever meet, expects nothing, but talks to me and listens to my problems , advises me ,although he is years younger than me , most of his advise is very useful. And he always winds up by saying that he appriciates me and wishes me the best and reminds me that Im a valuable person to know. Which is heartening. Its not flattery because he has never tried to extract anything from me .

He is a bit of a character, there is more about him in my website. I think he is a viglante

In retrospect - I have met lots of colourful people in Colombo in the last 5 years - some of the really cautious hypocrites are placid professional goody two shoe characters who have "DECENT " all over them, regular "accepted " members of society, bankers, lawyers, accountants "tie -coat johnies" what have you with their detailed codes of ethics - lying, finger pointing and secretly fornicating like there is no tomorrow- and then I have met the slightly "underworld" types-social "misfits", "hippies" and women of "ill repute" and outcasts but do you know what ?-they actuually have principles!

And...By the way Nubie has told me hes looking for a nice girl ,probably a bit older than him, who understands him. hm, brown eyes, a lovely singing voice and a hot bod to die for....not to mention a kind and genuine personality...wonder who the lucky girl will be and if she will even know how lucky she is!
Posted by aljuhara at 8:36 PM No comments:

the week to thursday

What a wonderfully wild week I had.Half of it is self censored ,sorry.

I also discovered a cousin of mine who I never knew existed and he turns out to be the cutest little hunk you ever did see (where have you BEEN all my life ?) (ok not exactly little - hes six foot and must be about a hundred kilos and adorably podgy )- ...and he sounds almost as happy to discover me as I am to meet him- its nice to be discovered and I never actually had cousins , since we were so busy avoiding my relations - this is fun, even if Im about 20 years too late for it...

and then yesterday I got into a friendly tiff with a very important friend of mine who was being terribly old fashioned and told me sanctimoniously that I should never marry again but should look after my kids and focus on them.She told me that my daughter would probably never forgive me if I did so and would become a lost case* like me...blunt honesty like that I value but I do beg to differ

Now just to get this clear, I love my kids like any mother does. Neither more (and Im not interested in competing in that sanctimonius sri lankan competition titled MS PERFECT MOMMA 2006) nor less than the fantstic maternal parents next door , and I would do anything I can to help them if they need me.They know this.
But stay alone and be a martyre just to prove that I want to FOCUS on them ?
I sure hope that I have not brought up kids who are selfish enough to WANT their mother to live her whole life alone , what a burden I would be to their consciences if they later turned around and found me limping around behind them dribbling humbly for scraps of their attnetion when they are busy executives with families of their own....
No I would actually prefer to seek happiness my own way (either married or spunkily and drunkly alone -) than FOCUS all my energy on PUSHING them around in dierctions I think is correct and desiging their lives for them which Im sure they have every right to do themselves. And hey I have this feeling that the cherubs would actually be happy for me if I were happy ....

But of course Mouse told me one word of caution about it all " Sis, "he said calmly at dinner "My good niece is at a stage where she is so wrapped up in Bollywood and getting her hair tinted and straightened I dont really think she would NOTICE if you married again, let alone complain. But one thing she would NEVER forgive is if you deleted the Need For Speed 2 Game from your hard drive "

thank goodness someone agrees with me ;-)

ps *Personally and honestly, I dont think Im a "lost case ", although many Sri Lankan people assume that because Im a divorced lady in Sri Lanka Im a total ruin. Im actually very cheerful , happy when left to my own devices and I honestly think these last two have been the best years of my life. I also would actually think it a bit of a victory if my daughter grew up to be a bit like me , a person who dosnt have any enemies , who never lies to herself (if you're true to your self it follows that you usually cant lie to other people !) and who would help anyone (or animal ) who needed it and tried to cheer up anyone who crossed their path .....
Look carefully if you will at the faces of the married ladies you see in the passenger seats of many luxuirious vehicles cruising around Colombo in the mornings . They are neat , clean and fashionable and they are not talking to their husbands or even looking at them. ...and they dont smile.
Posted by aljuhara at 8:06 PM No comments:

Stumbled across a rather fun article ,today it starts like this ....

I have a confession to make. Although I am the birth mother of two grown sons, I never lost my virginity.
No, I know exactly what I did with it....
http://www.psychologytoday.com/articles/pto-20040520-000002.html
Posted by aljuhara at 8:02 PM No comments:

....That was Ash, in case you didnt get a chance to actually make eye contact - and I think he could actually be useful ,when he actually is around. He left saying he thought you were a " very nice fellow".I got more detail on the atrocities our uncle has committed on him ,poor chap, and he has also damaged a knuckle in an LTTE grenade attatck (he CLAIMS)(i personally think it really looks like he hit something that didnt actually give way -high spirits,them forces boys)He also claims he got a promotion to CI(Chief Inspector )...kind of interesting eh what...he wanted the number of the bus , but Im afraid to give it to him.I dont mean that kind of revenge....
Posted by aljuhara at 7:17 PM No comments:

Quote of the Day :
Just when you think you've made it- your towel falls off.

Urban Dictionary Term for the Day :
Mouse Abuse ; thats when a computer is fundamentally real slow but some silly people think that double clicking things like mad will actually get it to respond.
Posted by aljuhara at 6:01 PM No comments: