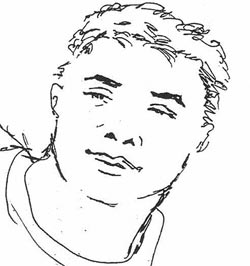 its often easier to get a characther with pen than pencil although you have more flexibility. "you have got the eyes perfect " was what Newbie him self had to say. ..
Posted by aljuhara at 10:01 PM No comments:

here he is -this is my first draft - I hope to give an impression of carefree boisterous youth. Like Meg Cabot says "Im not very good at drawing guys"
Sorry.
There will be more slight rearrangements of his features, till I get it right I can gurantee :-)
Posted by aljuhara at 9:23 PM No comments: 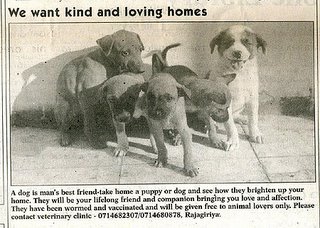 Posted by aljuhara at 9:20 PM No comments: 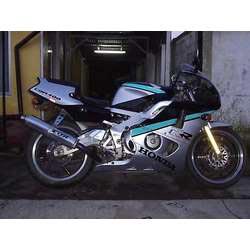 He exists and thats the bike. Now just pushing that around in a tight corner or getting it out of a drain gives you muscles so you can imagine what he looks and weighs like.
He said he lost his temper once when a tuktuk sidewinded in front of him and caused an accident at about 80 mph- he and his buddy rearranged the features of not only the tuk tuk driver but his passengers too. I told him I thought it was downright low down.
In the next post I will show you a drawing of him since he refuses to give me a photo.Sensible dude, but then would i ever post peoples photos without their permission?Line drawings are somehow clearer anyway...
Posted by aljuhara at 6:57 PM No comments: 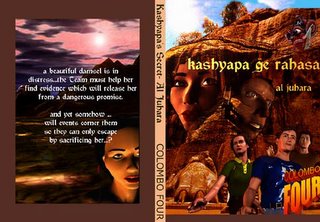 The cover of my second story - Kashyapas Secret - its an adventure set in Colombo -if youre interested in reading it do write , and Ill send you a copy.If youd like art like this to complement some project of yours - jut let me know.My fees are Very Reasonable....
Posted by aljuhara at 6:42 PM No comments: 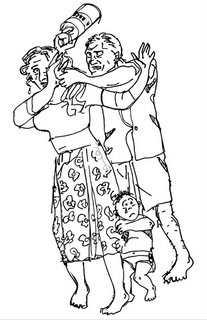 This is one of the illustrations I did for Shahinas Manual on WOmens Rights- this illustratres domestic violence obviously.We have to explain to some sad women why this is not necessarily part of life . Hope you like the style.

This subject is quite close to my heart- so to speak. My ex-husband thought I was property aka chattel I think its called but I did correct his presumtion in time. I did try about 9 years of negotiating but it didnt work - some guys just dont learn.
Now I find it vaguely exasperating when I have to listen to women who tolerate being pushed around just because they dont have nuts. My own domestic assistant drives me up the wall, by telling me about how she gets hammered by a drunkard each night - she has to work 16 hours a day to ensure he gets fed and watered , so she can afford this privilage. When asked why she tolerates it she says "for the sake of the children" but this cant really be true since her kids are in their 30s and late 20s.
Posted by aljuhara at 6:23 PM No comments:

I figured how to add images, which is important.I do believe a picture is worth a thousand words.A line drawnig is worth about five hundred but Im ok with that.Heck a smiley is worth about twenty :-)
Personally I think i look like a relation of Sammo Hung...not that hes a bad guy. I like his attitude. What do you think?
Posted by aljuhara at 6:14 PM No comments:

The best part of a writers life is when shes actually writing - regardless of whether it pays or if anyone is reading it. based on this observation I think what i suspected all along is true and I am in fact a compulsive obsessive writer
Now as to where my current story goes a lovely friend of mine named Sundi - from austrailia - who is a fan of mine - has so far influenced the latter stages - and my own daughter laughingly gave me some good ideas(although she dosn't read my books-i complained but she said that's life - most famous authors relatives dont really read their books according to her-i cant believe that im at a stage where my offspring can have opinions !!!- shes now taller than me too - a pleasant shock -) meanwhile I met Ruffian yesterday 0 heck the guy is going through a real transformation, i think the separation is the best thing that happened to him (just like in my case- sad though it sounds-)now if only hed quit smoking - the world would be his oyster-
if he is lying to me and he isnt really seperated at all - Ill get someone I know to break his kneecaps. Honest i will.
Posted by aljuhara at 6:06 PM No comments:

On suggestions from Brother Mouse, Aljuhara creates her second blog , which considering the amount she compulsivley writes, has been pointed out as a serious lacuna so far. Every writer SHOULD have a blog.Whatever that is.and if you dont know what lacuna means look it up in my ngo bullshit generator- not that you will get a real explaination but its fun.
Posted by aljuhara at 8:44 PM No comments:

Problems of the day

I have to get my newsletters out but Word 2000 has cracked up on my PC and i cant edit it till Alty comes in. Alty is stingy about how much it costs to install new software onto CPA computers.Thats 120 for the CD and 80/= for the trip to get it -a whole whopping 200 /- ruppees Sri Lankan for the procedure. But hes a nice dude generally.
Yup Newbie came over yesterday- he has a fantastic bike a Gullarm whatever that is, it took some reversing- and he has to sit crouched on it like a bat in a gale. He was not impressed by my photos of Gia. but why?

Im begining to think this blog idea is exactly what I needed - somewhere to write all my excuses as to why I could not contact all my friends and aunts. I have so many friends in my life and love them all but they get annoyed when I dont put time into it and think that i have forgetton them .I have not .Its just that its such a rat race and I have to keep food on the table (even if Im often trying not to eat it-)so sometimes actually I honestly dont have the time.Thanks for suggesting this ,Mouse, and oh.thanks for being such a wonderful sibling.
Posted by aljuhara at 8:44 PM No comments:

Name: Chandrika (more at www.chandrika.biz)
Sex: Female, but I don’t accept any of the weaknesses attributed to the state.
Age: 34 looks a bit older, but feels a lot younger due to having lived life back to front.
Civil Status : Divorced in December 2004 after 4 years separated mother of two a lovely and cheeky daughter aged 14 who is mad about Hindi films, and a naughty but sweet son aged 9 who likes to cook. The kids however want to stay with me and my mother in law is still a good friend as are all my sisters in law, so they are very much a part of my life and always will be. Reason for divorce was among others domestic violence at the time so it really wasn’t something I could negotiate .
Physical appearance: 5 ‘5’ 65 kg, 38-32-38. fair skinned, hirsute, frizzy hair, short sighted, a few teeth missing but so far all toes intact. Podgy nose. Excellent behind, I’m told.
Profession : ACCA finalist works as a Librarian, currently studying graphic design, and a bit of French in limited spare time.(the language)
Education: till 13 schooled at various foreign schools including Norman Gordino in Kampala and a primary school in Manchester , Lindsay in Colombo, and from then on the world is my teacher. Would love to go back to school
Religion: Humanist, Buddhist upbringing, admires all religious leaders, disagrees with Islamic ideas of practised degradation of women. (Willing to argue on this topic for hours.) Gets along well with Christians Catholics, and vegetarians.
General Disposition: Cheerful, jovial, indulgent, honest, laid back, sympathetic, broadminded, understanding except where it comes to smoking
Vices : flirts a bit too much . Somewhat unhygienic, lazy and occasionally mean to small children, (only if trapped with them.) leaves used tea cups lying around and throws clumps of fallen hair and sometimes used underwear, behind book shelves etc. suddenly laughs and screeches loudly. Jumps to conclusions. Very bad singing voice. Useless at gardening – any plant dies if I so much as touch it.
Advantages : a very good telephone voice, good at massages, anything I touch gets well soon- animals live- Excellent English , sense of humour if understood is guaranteed to bring cheer .
Likes: Sunshine, clean flat surfaces, sun dried kittens and animals of any type, milk, murunga, vaathathel, small onions, garlic, books and that row of second hand book shops in MacCallum Road, horror movies, Famous Fives, Tintin, Wilbur Smith, Alistair MacClean, Enigma Enya ,Spanish and Arabic Music, jungles, old monuments, a good cuppa tea, travel, writing and my motorbike.
Dislikes : cleaning up after cooking, stuffed buses, cold rainy mornings , hypocrisy, being restricted ,confined or incarcerated in anyway, being suspected of lying (but to be honest it’s a long time since anyone dared to do so) & government offices .
Odd habits: taking tea and a magazine to the loo, smiling absently at no one in particular in the middle of a crowded bus, dressing in flannel.
Social Habits: avoids parties like the plague, vaguely disapproves of drinking and gambling- strongly disapproves of smoking and drugs, prefers to stay home with good music and a second hand book. Likes to go to temple but not on crowded days
Seeking : a partner in crime. He should be : kind , intelligent, honest, dependable,caring,artistic at least 80 kg and 5’5’’ , preferably mid thirties, should be divorced or widowed , preferably with kids, and he should understand everything in the above profile(even the murunga) even if he doesn’t agree. He should be willing to put up with lots of weird unsanctioned laughter and a few hippie friends, and actively support my cat farm and 2 dogs. .. He doesn’t have to have much money but a good bike would be much appreciated. but he must never make the mistake of borrowing money from me because I don’t respect that in a guy. He obviously has to be a person who appreciates good writing. Long hair is ok, dark skinned guys welcome, beards are no problem but nose and ear hair and mustos are OUT. Letters and calls and even meeting a few ex girlfriends will be tolerated even encouraged if it makes him happy. But, lying-never! There is just no need for lying in my home.
Oh and he has to smell nice.
Posted by aljuhara at 8:30 PM 3 comments: