NO CAT LEFT BEHIND Sri Lanka

Glue traps are a gruesome way to die for little animals, and this is Tinkerbelle a stray kitty who was caught in one, her front leg also breaking in the effort to release her, which is a common occurrence in victims of these inhumane devices. Tinkerbelle's rescue was funded by a private animal rescue fund named NO CAT LEFT BEHIND SRI LANKA.  This FB page based fund was initiated in 2016 by Dutch national Anouk Gaastra who was also the founder of Cat Protection Trust later taken over by animal rescuer Indira Sahadevan. The objective is to sterilize street cats and the cats of poor owners who cannot afford it, so as to prevent/reduce overpopulation and suffering among stray cats. 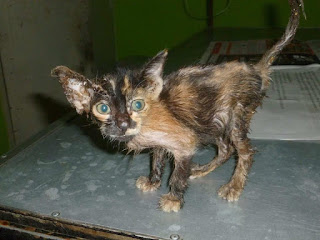 Locally resident animal rescuer Marilyn Wouters, who runs a shelter for disabled and paralysed cats in Negombo now helps raise and manage resources for this fund too, personally contributing to the fund on a monthly basis. With the kind support of a team of dedicated vets who work at subsidsed rates, the NO CAT LEFT BEHIND page helps spay, neuter, and treat injured and wounded street cats. Marilyn is also the author of "Picking Up the Pieces" a vivid memoir of life in a number of countries, sales of which also support her charities.

"But some people even abuse our fund, they say they cannot afford the operations but they drive up in cars, clearly they are not poor, this is stealing the chance from another poor person/animal," says Marilyn who emphasised that this fund is setup to help lower income animal supporters, overburdened "street feeders" and also helpless ownerless cats. "Some cases are very expensive to treat as they need long term hospitalisation" 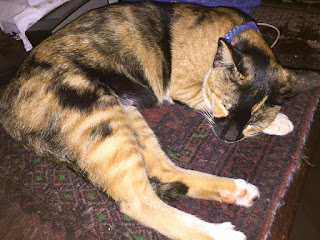 To date 225 felines have been sterilised and 70 have been treated with funds of around 1.5 million LKR collected by Marilyn and her friends. The Funds have gone towards saving very pathetic cases such as neglected cats with chronic maggot infested wounds, dog bites, and broken limbs. "An estimated 90% of the money was from foreigners," adds Marilyn who works tirelessly on social media to raise awareness of the plight of the stray cats of Sri Lanka. "Since my outcry in December some donations came from Sri Lankans and I hope to be able to pay these bills and continue this work," To help support wounded and injured cats please join and support the FB page https://www.facebook.com/nocatleftbehindSL/  and buy a copy of Marilyn's book "Picking Up the Pieces," You can help support this feline emergency fund directly by sending donations to Dr Asanka of Royal Vets Clinic in Maharagama.TP 0779470047 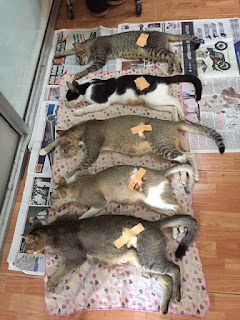 Safely spayed cats in a row