Greetings and warm regards from Purradise. 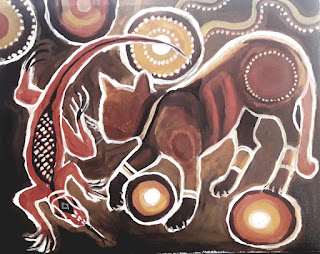 It is I, Peachy the 23rd, descendant from a long line of regular backyard cats, distantly related to Serious the 48th, who was a rather foreign I hear having been brought into the country on a Portuguese galleon in the time of the Kandyan Kings. Knowing her character though Im sure she was not really formally imported, but just scooted into the ship kitchen when no one was looking and got locked accidentally in the provision cupboard, only to be discovered and let out  in a hot nightmare of an island named Ceylon…cat habits, just like Hewman habits, die hard. Cats habits actually die harder. Trust me.

Well, Im Peachy, or anyway that's what they named me although I am actually gray and white with yellow eyes. My mistress is a woman we nicknamed Ally, who writes letters to the weekly papyrus- Hewmans like to sit and look at these flaps of crackly  white stuff for a long time, whereas we just like to scratch it to shreds, or pee on them- even though in many households, we get our dinner on them. (If dinner is too drippy the papyrus melts and we have to lick the floor…boring.)

Anyway here I am talking to you good Hewmans and explaining all about us catpeopple.

For a start,  for example,it's a myth that we have nine lives, please get that our of your heads. We are just as mortal as any other animal, we just look a lot alike so its easy to replace us – that is probably the foundation of this silly misconception.

We are delicate. Really.

Then there is the myth that we like eating rats.

We prefer sardines or salayo. If you look at this objectively for a minute you will easily realize that in the natural state there is really NO WAY for a cat to catch a sardine, so this means we need an intermediary. That of course is you, my dear long suffering host race…

To make sure that you understand what we want from you( fish, a hot lap or cow secretions) and give it to us(- unconditionally-), we have spent hundreds of years evolving a system of mews, purrs , fur explosions and quiet thrumming vibrations which those of you who are cat-sensitive will understand even subconsciously and the rest will positively hate. (Unfortunately there seems to be no middle path although we are working on it)

In return we provide good examples of stress free living.

It is known that spending as little as ten minutes with your cat is good for your heart ( unless of course said cat has done something under the sink- in which case it might be not so good) the truth is we show you Hewman people how to relax, how to not bother, and how to totally accept ourselves (and you of course)…

Now how bad can that be?

Next week: Diaries of an ordinary Sri Lankan house cat.

I cant believe it – the year that seemed to have just started is now three quarters complete. Im older and –wiser, I think: Ive seen so much in this time.

Patchy decided to Expect.  .It made her young and frisky again. We were all expecting with her, but since she is an indecently old cougar way past reproductive age with a wound down biological clock….the catlet she got was actually rather dead. So she lost it and of course resolutely and determinedly as mother cats are supposed to, she spent so much time looking for it and mistress Ally had to console her and explain why the baby had had to go in a small cardboard box.

Our kind hewmie family  tried bringing another substitute catlet from a woman in Kotikawatta who has 160 dogs and 40 cats. This woman is amazing and spent some time explaining how she lived her life for the animals and how she worked like a machine and cooked 25 kilos of rice a day.

I personally thought it was a bit creepy when she told me about 160 dogs in cages ..and cats too.

Let me emphasize this :cats cant live caged, it's a fate worse than death as far as we are concerned. The thought of it makes me want to gnaw my legs off personally.

But to be incarcerated WITH dogs around , now that is concentration camp stuff. Let me change the subject somehow…

Ms Ally was crowing about two things she had done today. One was eaten bulath for the first time in her life (goodness knows what possessed her) and the other was to get bitten by a freshwater leech. I don't know the gruesome details but I think we should all be thankful for small things in life, such as BLOOD COAGULATION. Its scarey when you have blood that dosnt obey this principle, and oozes on and on and doesn't dry even when it hits the floor; her bitten leg smells so WEIRD my ears went back suddenly. How did she get a leech bite in red hot Colombo? Well, Ms Ally is always going off looking for land, and since she has no money to really buy any and dosnt really do the brokering thing either; I suspect that this is the closest she gets to  "budget tourism" taken to a new level of stingy…I know she loves this wild island, although it brings her grief. She can't even find a committed man here, generally I think because most Sri Lankan guys don't like cats and she has too many.

ETB is ok though, he generally leaves us alone and grudgingly feeds us with the belief that this will help his future prospects…

Did you KNOW by the way , that leeches are one of the FEW mindless, spineless annelids that care for their young , by carrying them around and feeding them? That we found on the interweb when she was trying to read how to stop the bleeding and that makes you stop and think. "Leech"is such a negative word for a maligned invertebrate who really doesn't hurt you, just takes a little blood and they are used in medicine for amazing procedures to do with keeping blood circulating . You knew that but did you also know it actually looks after its offspring giving it food and transport and protecting it like mammals do-  though it dosnt have much of a brain? .  One wonders how they got such negative publicity. But now you know what they are good for!