The Strange Case of ALJUHARA

- sometimes – because of a name, lives touch. 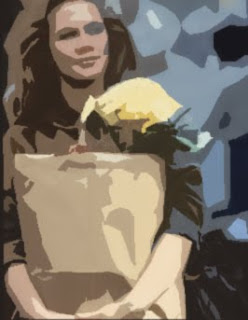 Because of a name, lives connected in strange ways. What's in a name, you may ask? Ever since I divorced and changed my name at roughly the same time Im prepared to admit there was some effect definitely. Underworld criminals probably swear by their aliases and their lives depend on them. So do singers, actors, artists and writers, don't you think? Madonna Prince and Shakira would probably project quite the same image if they were called Bandaramanike. Or would they , who can say? Well Sri Lankans are probably one bunch who spend a lot of time and money (on drunken astrologers) deciding on names for their babies and they say there is a serious reason for that. Your name can decide your life.

Why do you call your self "aljuhara" some people ask me (or actually they say mokoda bung mey aljuhara case eka?" or something like that) and its only now after almost  two years of writing this column under a myriad of different identities that I'm getting the chance  to  tell you the background about my pen name, and of course…. you can count on this being another schizoid story…

Years ago I watched a movie called "Jewel of the Nile" which the child in me thoroughly enjoyed. If I tell you that that was my favourite movie, it may describe my character to you. Playful, dreamy, fun loving, and not very serious, someone who believed in happy endings.  It had all those ingredients of a dream romance, there was the lovely scatter brained novelist lady, Joan Wilder ( with perfect legs and a tiny red nose), a heroic dashing action man, (played by Michael Douglas, bless his white cotton socks) and a vile but charming villain( predictably Arab) and also an absolutely amazing character, the actual "Jewel" (which is what the words al juhara mean) who is a Sufi. The adventure, danger and romance in this story leave him completely untouched but mildly bemused and the best picture that comes to mind is of him sitting peacefully deep in meditation on top of a speeding train while people are rolling about fighting near killing each other a few carriages away. I totally admired that cool aplomb and that's the character  I wanted to be although of course the child in me was completely fascinated by the romance, the action and the adventure of the story.

Another part of me completely delighted at the life of Joan Wilder who seemed to be having my dream job, and being a beautiful lady writer who actually gets paid and gets to go places to carry out the job she loves best. Ah, such a lucky creature, what an inspiration I would think. So when it came to choosing my pen name, there I had my two favorites and the rest of course you know- my best comic writing comes out under the nickname of aljuhara and sometimes I write under my own name (serious stuff) and even more serious stuff under a few other nicknames one of which is Joan Wilder. For all these I have booked the usual internet presences such as gmail, Face Book and a blog here and there.

About a month back I received a mail to my "Joan Wilder" email from a female telling me her name was Joan Wilder too and asking me if I was willing to sell the email account. She also asked me out of curiosity how come I had this email. A lovely chatty direct way of writing she has and so I thought she was a US school girl somewhere and replied that long ago Id seen a movie I really enjoyed and these were characters in it who I had related to, so I had taken these nicknames.
What she told me next was so amazing that I had to do a lot of research to check if it was the truth and now since Im satisfied with the answer, heres the email for you.

Thanks for writing. you live in Sri Lanka, eh? When i was little, in school, a long time ago, i did a long report on Sri Lanka -- then Ceylon -- and remember feeling that it was a special place to me. I've never been there. I live near Boston, Massachusetts.

well, here's a story for you…. My friend, Diane Thomas, wrote the original screenplay for Romancing the Stone. It was in 1980-1 or so. We were roommates just before she began writing it. I moved to NYC and she moved out the beach in L.A. - Malibu -- and committed to writing a script. She worked on it for a year on an old Ibm electric typewriter. At the end of the year, she gave it to a friend in the business who gave it to his agent. A week later, the agent phoned her up and said he'd sold it to Michael Douglas for $250,000, which at that time was the most an unknown writer had been paid for a script. So there were articles in the newspapers about it.

After the movie was released and did so well, Diane went on to writing more screenplays, including having a three-picture deal with Steven Spielberg. I spent the summer of 1985 with Diane at her then beautiful house in Malibu. at the end of the summer, I went back to NYC and she was going to come visit me for two weeks. A week before she was to come, she was killed instantly in a car crash a mile from her home. She crashed into a tree at the side of the road. The car was given to her by Michael Douglas as payment for her helping to think up the sequel to Romancing the Stone, which she had refused to write.

So. she named the character after me, although the character herself I see to be based on a combination of both of our lives at the time we were roommates.

If you are curious now, and you haven't seen or cant remember the movie run along and borrow it, because it will be great fun now just as it was then!( warning not in front of the little  kids because there are one or two very steamy scenes too)  but remember too that this was written by a city waitress based on the lives of two struggling student journalists and while it  led to  a magical interplay of character, fantasy  and tom foolery resulting in a movie which delighted millions around the world,  the happy story has a sad ending for the writer, who  died as mentioned in a car crash in the dream car she received as payment for her talent.  ( Didn't Hercule Poirot once say "Beware of the day your dreams come true , for then you will have nothing more to dream about  ,") A part of the romance lives on in my new friend who is the character behind the name, and is a talented, graceful and very young looking grandmother with three children and two grandchildren, living in Boston . Life is bittersweet we know and names make people, and sometimes make people meet for better or for worse….
Or maybe its just destiny finding an excuse...
Posted by aljuhara at 1:33 AM