A Week in the Village

To write the last bit of this book I took a bit of leave from my human rights NGO office and stayed in our village, at my house Jungle Library, surrounded by fields, tall old trees, 3 rude cats, and three thousand books. You can google "Jungle Library Sri Lanka"and see photos of this place and the surroundings (there are even 8 positive reviews from optimistic sri lankan google guides who have never seen the place) 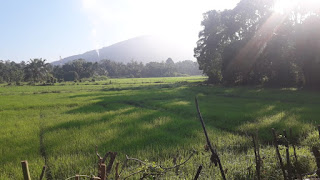 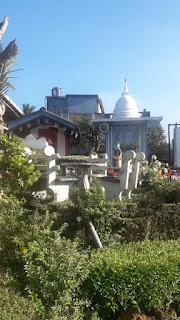 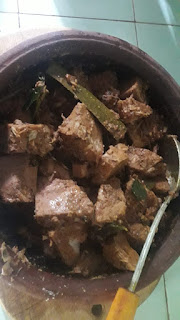 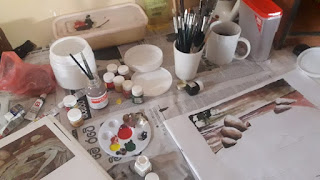 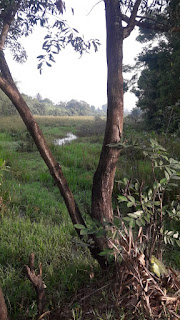 A Random Tree I thought was beautiful 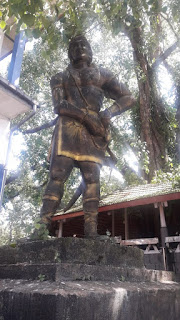 Some ancient herioc dude whose statue is in the Hanwella Town centre - it maybe Jayaweeragoda Appu- who was killed by the Portuguese. I dont care, he looks fierce and imposing so I took his photo

It was an interlude I will not forget for a long time: not only did I eat the best of village grown superfoods and walk and hike for miles among pristine paddy fields, brooks, farms and rubber estates, but the exercise, fresh air, and healthy eating made my blood sugar descend to pre-diabetic levels for the first time in ten years. This in spite of the fact that I had forgotten to bring my insulin pen along and was also experimenting with less metformin than prescribed. So I don't need people to tell me that less stress means less disease- heres the proof clear and vivid on my sugar testing machine.

I finally managed to live with Keju ayya (yes he is older than me -by two months or something-) without fighting with him or screaming at him (except when he vaguely justified the man up the road burning a cobra. This is covered in my chapter on Village Ethics), generally because I learnt to let him sit all day doing whatever he wants including spending a large amount of time poking his phone on Facebook. He was also allowed to drink as long as he went somewhere else afterwards.

Early mornings I generally escaped our cosy bedroom, stumbled out into our rather gnat ridden living room and meditated before anything starts, not much at all just about 20 minutes at a time. Then after morning tea we hiked, exercised across the floor, pedalled our stationary bike, cooked stuff and then I did my typing, and did some freelance writing work because we needed money to survive, fix the plumbing when it became wild, and to pay internet bills. But generally, the daily expenses for both of us in the village, (without alcohol) came to around three or four dollars a day. I'm pretty sure if I lived alone and ate more of what I prefered, like more oats and bananas, it would be about one dollar.

Afternoon was a bit of a scuffle where Keju had to bully me into bathing because I'm quite lazy to do so. However the heat, even in December would escalate slowly till it became impossible to continue without soaking one's head in the refreshing well water of Hanwella.
We would also sometimes go "shopping" meaning prowling the town market to buy greens, beans, sweet potatoes, mangoes and fresh kippers for the cats, or anyway just go out to smugly remind ourselves of the busy working people and traffic out there, after which we would run back home and I would write again.
I love Sri Lankan marketplaces. They are vividly colorful, and in Hanwella on Mondays and Fridays there is a market which sells everything you need, from fruits and vegetables, to handbags slippers, butter cake, pork, flower plants and clay pots- you name it.

In the evenings we ate modest amounts of clay oven baked fresh bread with dhal curry, and then watched depending on the mood, war films, horror films  or comedies from pirated second-hand DVDs ( Maybe recycled is a more acceptable word ) available from a corner of the vegetable market (which cost about ten cents each).  Most of the DVDs had been watched before and were a bit scratched, so I had to wash them in shampoo and then rub them on my clothes to dry them.

There were no schedules, no traffic and no deadlines. No people, no visitors, no relations we had to please, no judgements we had to avoid, no time tables to be followed.

For me it was a week of incredible peace and happiness, and I understand how happy a person can be on one's own.

From Keju Ayya, in spite of his alcoholism, and complete lack of declared income, I learnt something which is very fundamental to the Buddhism I was studying, something which is almost inaccessible to even the most determined meditator: how to completely let go of the past and to forget the future and live completely in the now.

Kejus motto apart from "Bang your drum though the ship is sinking" and "Eat what you're given and watch what happens" is plain and simple: Just BE happy.
Posted by aljuhara at 1:24 AM