The Snake Rescuer of Habarana

He has given mouth-to-mouth resuscitation to a deadly Indian cobra and he  keeps a saline solution and aloe vera tub to help heal snakes who have been attacked using kerosene: a man of humble means, who makes a livelihood from maintenance work, Jeganadan the snake rescuer of Habarana has never in his life accepted payment for the thousands of serpents he has rescued and released, because, he says, 'then people may hesitate to contact me."

"I started my rescue work in 2004, with the realisation that snakes are the animals probably treated with the most callous injustice in the world. You will see people and organisations rescuing dogs, birds, elephants, leopards -but there is no one who will stop and help a suffering snake." he points out.

Jeganadan has made it his life's passion to do so, at no small risk to himself.

He has no access even to antivenom, which is not available in rural hospitals, and points out that a trip from Habarana to the nearest government hospital with snake venom, which is in Polonnaruwa would take 1.5 hours, which would be more time than it takes to kill a person if bitten by a viper.

"The media is not very interested in saving snakes, there is nothing newsworthy in it for them,' he says adding that all the emergency calls he gets are through word of mouth and more recently social media which helps spread the word about his cause. " If an article or a post can save at least ONE snake from being killed then that is all that matters to me," 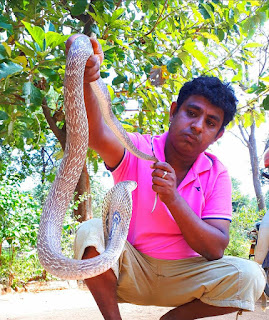 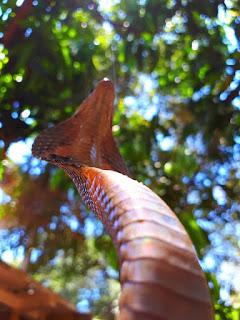 "My first advice to anyone if there is a snake discovered is not to poke or disturb it at all and never to throw kerosene etc, but to quietly watch it to make sure you know where it goes"  After a call, acting as soon as he possibly can, Jeganadan bikes over to the house and begins the long and arduous task of hunting the snake out, ensuring not to harm it in the process. This often means reaching into dangerous corners, climbing into roofs, operating in confined spaces and a great deal of patient searching until he locates and catches the slippery subjects.

On an average, he rescues around a dozen snakes a month, a few venomous but mostly non-venomous. Usually, the innocent non-venomous ones would also have been killed cruelly and needlessly if not for his quick intervention. Not only does he adamantly refuse any payment for this service, but all expenses are borne by him, on the principle that if he accepted payment some people may think twice about calling him. Often days of patient caring are needed to rehabilitate a snake which has been attacked with kerosene, by calming it, bathing it in saline, and then placing it in a tub of aloe vera gel; death from kerosene sprayed on any snake is long drawn out torment where the animals skin blisters and peels away leaving wounds which even show its skeleton, after which it gets infected and slowly rots to death over a number of days. More often than not it is entirely harmless non-venomous snakes that meet this fate, not to mention valuable endangered species. Even if a snake is venomous, as they never intend to harm people but only stray among us because their habitat is destroyed or they are hunting rats, or desperate for water, they can easily be kept at bay with proper precautions for example like keeping some water at a distance from the house, and keeping your environment cleared according to Jeganadan, who advises that all snakes have an important part to play in the ecosystems by controlling rodent populations which would otherwise devastate an agricultural economy such as Sri Lanka, and they are also the source for medical preparations etc. Only a handful of the snake species in Sri Lanka are venomous but due to lack of awareness of people, snakes are brutally attacked on sight.

On the subject of snake bite deaths and the lack of locally made antivenin, Jeganadan reserved comment except to say that after 30 plus years of trying to manufacture it, there has not been any real success from the authorities in charge. Many deaths would be preventable if the anti-venom were available, but it seems to be low in national priority as it is mostly poor villagers that would be affected.

Jeganadan goes out of his way to host regular awareness workshops for interested people, showing them the difference in non- venomous snakes so that at least knowledge will prevent the destruction of these innocent animals- but he has to carefully circumvent current laws which make it an offence to have such wildlife in one's possession. He laments over peoples attitudes, official lethargy and the ironic legal situation he personally faces when he tries to deliver this much-needed service to people; he needs to have live specimens to demonstrate to people that they are perfectly harmless, but at the same time it is an offence to have such fauna in his possession, so he has to release them very soon.

The attitudes of some people too have been most demoralising. Many ridicule him openly, some have even gone to the extent of trying to accuse him of profiting from the services he selflessly undertakes, which he points out is inaccurate because he insists that he will never accept payment for his time or expenses, as saving snakes is his life's passion. In spite of insult and criticism by such people for saving the snakes they believe should be exterminated, Jeganadan carries on undaunted, sure in the knowledge that he is doing the right thing, in saving people, snakes and Sri Lanka's environment alike.